Phew! It’s been a busy beginning of the school year, but I’m finally getting a moment to sit down and write about some fun performance news from the last two months: my debut performance at the National Flute Association Convention and a guest artist recital at Liberty University.

The NFA Convention was in sunny Orlando this year; it was a blast, getting to perform Jacob Thiede‘s And everything in-between on “The Future Is Now” concert with other electroacoustic-loving flutists, making new flute friends, and running into old flute friends. Taiki Azuma was such a big help, listening to my soundcheck the night before! 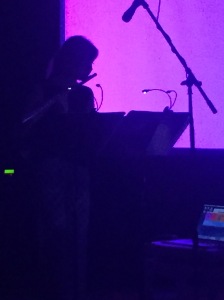 It was such an honor to perform at Liberty University. The Liberty faculty and students were tremendously encouraging, the lighting and audio tech staff was tremendously helpful (thanks SO much, Amy and Kevin!), and the Concert Hall in the Center for Music and Worship Arts is beautiful. What’s more? Robin McLaughlin kindly accepted my commission to compose a piece for the occasion: In the Beginning for spoken word, flute, percussion, piano, and lamps. I’m so excited she was able to join me for the premiere, with the wonderful Erik Alexander Schmidt (percussion) and Elizabeth Church (spoken word). I’ll be posting a video of the premiere soon; and I hope to recording a video of the piece in the next few months, too, pending funding!

This fall, I’m looking forward to solo performances at Carroll Community College and the Raleigh Area Flute Association Flute Festival. Until then, a new school year has started; and I’m back, teaching flute at Guilford College and at Ms Georgia’s Creative Arts Academy. 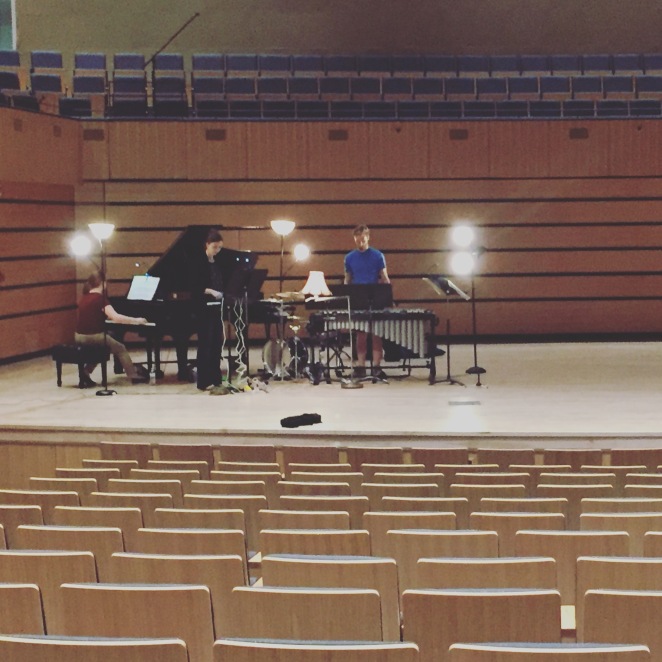 I feel duty-bound to write about my time 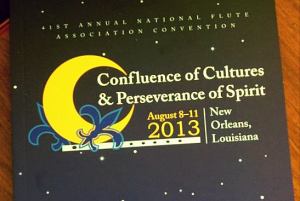 as Assistant Program Chair for the National Flute Association.  Yes, my time has been scarce; but that is not the only reason I have put it off for over two years.  Somehow, I haven’t known how to write about such an enormous undertaking, and, frankly, I still don’t have a clue how to go about it. 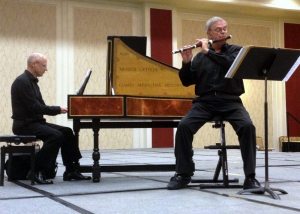 Kris Keith and the Krewe of Pan.

The NFA was what I lived and breathed for fifteen months. Somehow, I managed to get Christmas Day off.  Otherwise, I spent many hours a week staring at excel files and word docs, answering emails–and that was only the beginning.  There was mail to sort and organize.  An anonymous proposal-ranking panel needed to be managed; we listened to demos and read bios for hours. Thousands of notification emails were sent and questions were answered.  There were conference calls and diplomatic phone calls.  There was a speech to give first-time convention attenders.  A convention schedule needed to be created and, later, checked through at least a million times.  There were event descriptions to write and organize.  There were convention grids to be made for the convention managers and works performed lists to be compiled.  Magazine articles needed to be brainstormed, and someone needed to manage both the NFA Facebook and Twitter accounts.  Would anyone believe me if I dared claim this poor paragraph only described the tip of the iceberg?

From left to right: Hubert Laws, Orlando “Maraca” Valle, and Jim Walker, jazzing up a storm.

In the fifteen months of life I gave to the NFA, I think I most enjoyed little
blessings that popped up unexpectedly along the way: like joking with Program Chair Tadeu Coelho about possible event titles.  At the convention itself, it was unreal to watch our schedule come to life.  I was excited to have János Bálint, my teacher from the Franz Liszt Academy of Music, attend and perform at the 2013 convention [check out a video here].  He is one of my favorite flutists, and one of the best teachers and mentors I’ve ever had.  There was a moment at the convention where, in explaining Hungarian folk music, he quickly
demonstrated by sweeping me up in a csárdás.  In the end, though I was responsible for helping make sure the events were running smoothly, the events weren’t what made the convention for me.  It was talking with Barthold Kuijken about Flemish politics, being remembered by Gary Schocker, conversing with Hubert Laws about cooking, working out an event room change with Marianne Gedigian, supplying Dr. Coelho with Cliff Bars, and other such memorable minutiae.

No, I may not have lived much those fifteen months; but I learned a mind-blowing amount in that time.  I may be crazy, but there is no way I can perfectly express how very thankful I am for the experience of being an NFA Assistant PC, not to mention how thankful I am to Dr. Coelho for his mentorship.